Rikka Takanashi (小鳥遊  六花,Takanashi Rikka) is the 2nd character in the Miscellaneous roster and is the female protagonist of the Japanese light novel series and anime Chūnibyō Demo Koi ga Shitai!

Schwartzshieldo: Rikka yells out the move name and opens her umbrella to thrust it forward, knocking away anyone who has been caught by it. The umbrella will remain open for a while. While the umbrella is open, you gain I-frames.

Chuuni-charge: Rikka poses three different times, showing off her chunnibyo-ness. Each time she does a pose, he knocks away those around her.

Avalon Strike: Rikka backflips up in the air and opens her umbrella to glide closer to the ground. After she hits a target, she releases the umbrella and lands near the opponent.

Rikka poses several times before taking off her eyepatch, revealing the Tyrant's Eye. She then bites on her thumb to draw blood in order to summon Konigin der Nacht. Her M1 changes into the massive sword, making it do 6.2/6.3 damage per M1, gain increased M1 range, and slower M1 speed.

Dark Matter Blaze: Rikka raises her sword up and charges a blaze of energy. She then swings the sword down to throw the blaze of energy at the intended area. The projectile explodes on contact or if it gets far enough.

Nergal Blast: Rikka raises her sword and slams the ground with the handle, creating a massive magic circle. Thundering blasts of dark energy start to strike around Rikka, damaging all those caught in it.

Kannatwinkle: Rikka jumps up in the air to shoot out 5 blasts of energy from her left eye. The blasts initially shoot straight forward then targets onto the intended enemy.

Bonk : Rikka raises her sword up and slams it down. 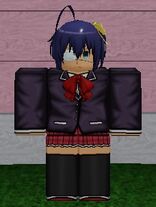 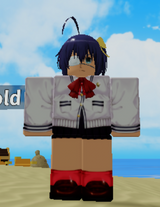 Rikka's 2nd skin, which is Rikka wearing the clothes of Rikka Takarada. 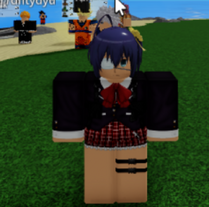 Rikka's 3rd skin, which is her without her leggings. 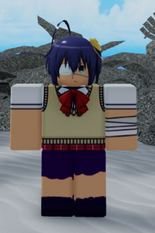 Rikka's 4th skin, which is Rikka's school uniform without her jacket. This is featured in the opening: Sparkling Day. 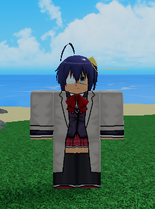 Rikka's 5th skin, which is Rikka's default skin with a big coat over it. 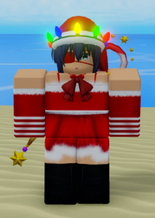 Rikka's 6th skin, which is Festival Rikka from the 2021 Christmas Event. 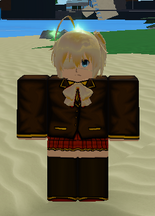 Rikka's golden skin, which is Rikka's default skin given a gold texture. 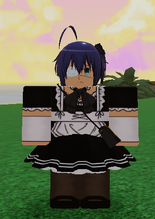 Rikka's legendary skin, which is Rikka in a maid suit.
Community content is available under CC-BY-SA unless otherwise noted.
Advertisement