Monkey D. Luffy (Pre-Timeskip) is one of the 6 current starter characters in ABA and the 1st character in the One Piece roster.

Gatling: Luffy bends forward and rapidly punches the target at very high speeds, so much so that his fists resemble bullets from a gun. (Blockable) Damage: 40 Cooldown: 20 seconds

Rocket: Luffy extends his arms grabbing his opponent and then lunges himself towards his opponent. Who Luffy flies towards is based on the player's cursor. (Blockable) Damage: 13 Cooldown: 10 seconds (Auto aim)

Gear Second - Luffy goes into a stance and turns into his Gear Second mode. When using Gear Second, his skin turns pink and has a smoke effect on his body.

Jet Gatling: Luffy bends forward and rapidly punches the target at very high speeds, so much so that his fists are not visible. Instead you can only see the air that is being generated off of Luffy's fist. (Blockable) Damage: 70 Cooldown: 20 seconds

Jet Bazooka: Luffy extends his arms back dashes at his opponent, & then pushes them forward hitting his opponent. (Guardbreak) Damage: 20 Cooldown: 10 seconds

Gear Third: Luffy blows air into his thumb to create the arm of a giant that will hit everything in its path. This move will instantly deactivate Second Gear and sends Luffy into base. (Guardbreak) Damage: 160 Cooldown: One-time use

Some combos with Luffy are:

Note: This combo will send you flying due to the fact that Rocket is at the end. 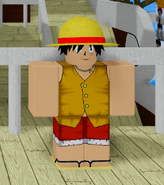 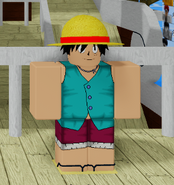 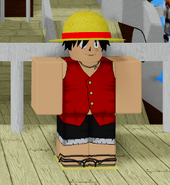 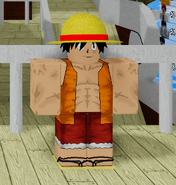 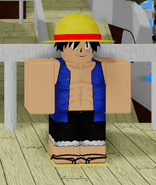 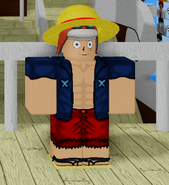 Luffy's 6th skin which is based off Luffy from the One Piece Film: Strong World movie 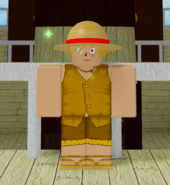 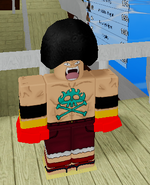 Retrieved from "https://animebattlearenaaba.fandom.com/wiki/Monkey_D._Luffy_(Pre-Timeskip)?oldid=4168"
Community content is available under CC-BY-SA unless otherwise noted.