$0
Deku (Izuku Midoriya) is the first My Hero Academia character.

Detroit Smash: Deku charges up a punch, and then hits forward with a very small range of air coming past it knocking back opponents. (Guardbreak) Damage: 25 Cooldown: 20 seconds

Leap: Deku uses his One For All quirk to leap over to his opponent. (Move does not deal damage) Cooldown: 10 seconds (Auto Aim)

Manchester Smash: Deku swings his leg around to deliver a roundhouse kick to his opponent. (Blockable) Damage: 20 Cooldown: 15 seconds

One For All: Full Cowl - Deku gains red marks across his torso, arms, and legs. These quickly disappear and are replaced by green lightning circulating around his body for the duration of the transformation.

Manchester Smash: Deku dashes to his opponent and swings his leg around to deliver a roundhouse kick to them. (Blockable) Damage: 20 Cooldown: 15 seconds

Shoot Style Leap: Deku uses his quirk to blast himself up into the air and fly towards his opponent. (Blockable) Damage: 20 Cooldown: 10 seconds (Auto Aim)

St. Louis Smash: Deku lifts his left leg into the air, smashing it down to deliver an axe kick to his opponent. (Guardbreak) Damage: 35 Cooldown: 15 seconds

1,000,000% SMASH: Deku uses every ounce of One For All to deliver a punch that sends out a rainbow blast of compressed air. Deku will be left with one HP after using this move. (Guardbreak) Damage: 100 Cooldown: Ends mode

Some combos with deku are:

Note: This combo is one of the hardest combos in the game to land, mainly due to the timing of the Manchester Smash. If you time it just a little off you will hit your M5 (GB) ending the combo.

Note: This is significantly easier to land than the first combo but you need to be closer to the opponent to land it.

Note: This combo needs to be timed just right where the Delaware Smash cancels the knockback that comes with an M5 (GB) 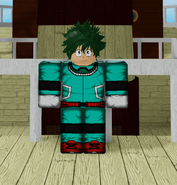 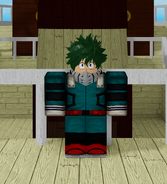 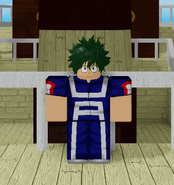 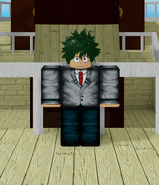 Deku's 3rd outfit which is Deku in his UA uniform 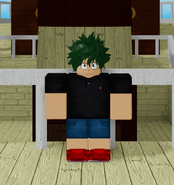 Deku's 4th outfit which is Deku from when he fought Muscular during Season 3. 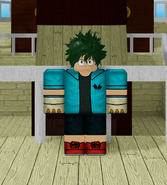 Deku's 5th outfit which is Deku during the Gentle fight. 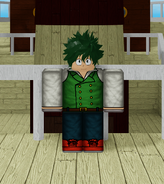 Deku's 9th outfit which is from the UA Entrance Exam

Retrieved from "https://animebattlearenaaba.fandom.com/wiki/Deku_(Izuku_Midoriya)?oldid=4210"
Community content is available under CC-BY-SA unless otherwise noted.